The Homecoming or, All the World’s a Stage…

Posted on January 23, 2016 by smallhousepress 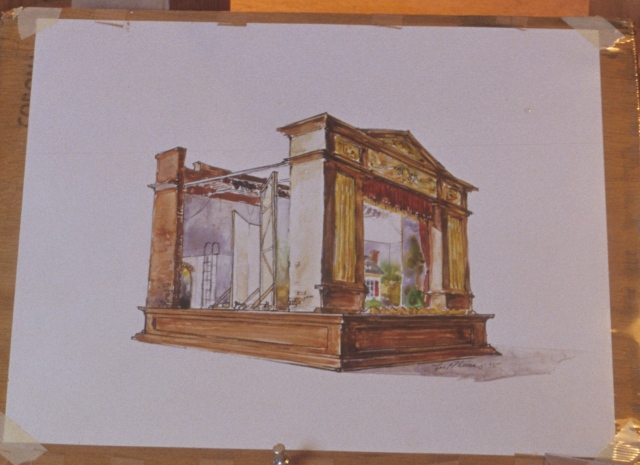 Sketch of the Davis Miniature Theater-to-be

It’s late. Two dog-tired travelers are trailing roller bags. It takes a beat or two to register–their motel parking space is empty. The car is gone.

That was us on October 30, 1995, just off the plane from Italy. The title quote–Sean O’Casey’s version–ends with, “and most of us are unprepared.” Sure enough, during our month of eating, walking and Eurailing around Italy, someone had availed themselves of that cute little ‘85 Honda hatchback parked at the back of the lot, a consequence we were unprepared for. The world whirled on, and no kind of magic would bring the car back. On the drive home the next day in the rental car, we repeated the family mantra—“It’s just another adventure.”

Despite being out of wheels, we had had a great adventure (beginning with locking ourselves out of that very same motel (not once, but twice) the morning we left for the airport). Our minds were full of the trip, miniature theater ideas, and the reality of other mini-projects awaiting our attentions. There was hardly time to notice that in our absence the Grateful Dead had announced their break up, or that Ebay was the newest quirk on the Internet.

Sketch of the Davis Miniature Theater-to-be

Once home, we hit the floor running. I’ve forgotten when, exactly, we began the Theater, but over the next 5 years we juggled teaching projects and travels with its construction. With the Italian toy theaters still fresh in mind, Noel sketched a design for the client, but then we were on to class preparation. More than a year later a floor plan evolved. Even later the base was constructed, flooring laid, and walls were cut so that bricking could begin. And there were the floating unknowns of how to make the elaborate proscenium, and what kind of scenery we’d build.

Rear view, with stage door at lower right, and cut-out for the dressing/make-up room

My favorite part was the make-up/dressing area, the one backstage room we finished, with a cutaway wall for close viewing.

Dressing/make-up Room, Davis Theater. Just by luck, and to add to the realism, some of the bulbs in the mirror light were out even before we installed them.

View showing finished exterior and cutaway wall. The orange door to the right is the open door to the small bathroom.

To me this room is the hub of the theater–the transition space where actors change themselves from daily life to the character on stage. The feeling of the room we made, if not the design, was a direct steal from the one-time Skidmore College Little Theater, where I spent the better part of my Junior and Senior years, so many lifetimes ago. 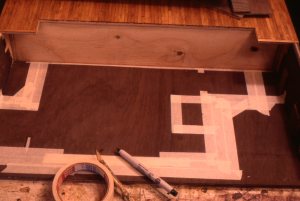 Taping off the floor for concrete

Laying out the floor

The other finished room under the stage is the bathroom,  which we squeezed in to the right of the make up room and under the stage door stairs. It can only be viewed from the far left side, or with a dental mirror, but here are some construction shots

Aging a corner of the lathe-and-plaster bathroom wall

So much of theater (and miniatures) is magic, a slight of hand, and so much of that comes from (beyond the playwright, director and actors) what is created backstage in the scene shop, the lighting booth, the costume and property rooms, and of course the Green Room—that other nest between stage life and reality. And miniatures share that kind of theatrical magic. One of my favorite quotes, which applies to both, comes from the sweet, Vaudevillian, long-running musical, The Fantasticks. It is spoken at the end , “It’s all an il-lu-sionnnn…” in a swirl of enchanted dust.

In 1974, my husband Noel and I began building aged miniature houses for collectors and museums. We were 70's dropouts. We quit our careers in advertising--art director and writer, respectively--and escaped Los Angeles in a VW camper and a Bug for a simpler life on the coast of Washington State. From a tiny studio in our home, we built 64 houses and buildings. Our specialty was aging--making a structure that reflected the scars and wrinkles of time, the elements, and human habitation. In the 80s we began teaching our techniques in workshops around the country, and I began to write our how-to's in Nutshell News and Miniature Collector. In 2000 we migrated across the Columbia to Astoria, OR, where , in 2011, we retired from miniatures. We are Fellows of the International Guild of Miniature Artisans and taught at their annual school in Castine, ME. By avocation I am a writer and poet. The blog is my way of working back into a writing routine, as well as recording what we did, and what we learned along the way.
View all posts by smallhousepress →
This entry was posted in Miniatures and tagged arts, dollhouse miniatures, miniature theater. Bookmark the permalink.

7 Responses to The Homecoming or, All the World’s a Stage…