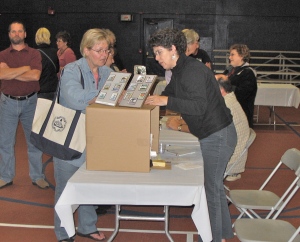 Miniature shows are a whole world unto themselves, at times circus-like. Sometimes they’re the miniaturist’s version of a rock concert–imagine 11 yr. olds lining up for a chance to see Justin Beiber, and you get the picture. There may be an age difference, but it doesn’t dim the enthusiasm of collectors waiting to see what their favorite craftspeople and artisans are up to. The tension before the opening of the sales room doors is usually heightened by auctions  for first and second place in line, conducted at the preceding dinner. Everyone thinks they’ll be cool about it, but when the group excitement builds, it’s infectious. The pros know to be there early, and have their money ready. Once I saw a woman with $50.00 bills folded down to ring size and woven around her fingers. Some people, who know their craftspeople, slap down their card and a $100.00 bill, tell you what they want and say, “I’ll be back!” as they head for their next favorite table. The true collectors come equipped with tiny magnifiers to look for dovetails, solder joints and other signs of fine craftsmanship. They keep us on our toes.

For the community of craftspeople there is another kind of tension building up in the calm before opening—is my table in a good place (i.e. easily visible from the entrance)? Will I sell anything? How do I stack up with the others? During set-up we would all visit around, making small talk and appearing calm, as if we hadn’t been preparing for this few hours for the previous 6 or so months. For Noel and me, just moving the houses from the van to the salesroom was physically exhausting, but once the elephant was in place, we didn’t have much to do but wait. And wonder. Then there was the initial rush of customers, followed by the dry spell as they dispersed around the room. If that went on for too long, or the table next to you had a crowd while you had no one, those old teenage fears of not being picked for the team arose. Curious, how we never get over that.

The one time we shipped a house to a big show the hotel lost it.  Not a clue. There we were, in New York, late at night, having flown across country, frantically searching every closet and storage area of this huge hotel for a fragile, paid for, one-of-a-kind dollhouse the size of  a bureau. The hotel event coordinators, in true New York fashion (being a native Manhattanite, I can say this) steered clear of any responsibility. It was the next morning before we found it in a utility room, thanks to one of the janitorial staff who had been asked to stash it, and remembered where.

In the years when there were miniature shows almost every weekend, somewhere, there was a corps of sellers who traveled from show to show, like gypsies. They often took up residence in campers or motor homes, working nights to fill in their stock. They booked sales tables close to one another so they could visit, as well as spell each other during breaks. What I admired most about these people was their ability to set up dozens, or hundreds, of tiny figurines, butter dishes, doll hats, trims, or metal findings in ordered and tiered displays in the time allotted, all pulled out of tiny boxes lined with tissue paper, and then reverse the whole process in the dreaded 45 minutes we usually had to repack and get out at the end of the show. The audience left, the lights dimmed, and off we went our separate ways. Until the next time.

In 1974, my husband Noel and I began building aged miniature houses for collectors and museums. We were 70's dropouts. We quit our careers in advertising--art director and writer, respectively--and escaped Los Angeles in a VW camper and a Bug for a simpler life on the coast of Washington State. From a tiny studio in our home, we built 64 houses and buildings. Our specialty was aging--making a structure that reflected the scars and wrinkles of time, the elements, and human habitation. In the 80s we began teaching our techniques in workshops around the country, and I began to write our how-to's in Nutshell News and Miniature Collector. In 2000 we migrated across the Columbia to Astoria, OR, where , in 2011, we retired from miniatures. We are Fellows of the International Guild of Miniature Artisans and taught at their annual school in Castine, ME. By avocation I am a writer and poet. The blog is my way of working back into a writing routine, as well as recording what we did, and what we learned along the way.
View all posts by smallhousepress →
This entry was posted in Miniatures and tagged collectors, lifestyle, miniature show. Bookmark the permalink.