Posted on December 30, 2012 by smallhousepress

About a year into our work on the Greene & Greene house we had to take care of some other assignments for our teaching schedule. The first was a project for the NAME 1987 cruise around the Hawaiian Islands. The result was the Tradewinds Fruit & Veggie Stand (the precursor to our 1988 Seaview Farms Fruit & Veggies). We worked our way through the Oct. 19 stock market crash, and Baby Jessica falling into and being rescued from the well. Eggs were .65 a dozen, and our favorite movie was Good Morning Vietnam. The Hawaiian theme was easy—on our first trip to Hawaii, as guests in a Kaui condo, the fruitstand down the road–full of freshly picked pineapple, coconuts and brilliant sunset papayas–was our favorite daily stop.

We built the weathered stand from our supply of rotted wood, striving to make a simple enough structure for the limited amount of class time aboard ship. The corrugated, rusted tin roof was essential, as it defined the outer island indigenous buildings. We had plenty of rust from our garage “metals department,” but it wasn’t corrugated, so the search began. We found a miniatures supplier of tin sheeting in the right thickness, but couldn’t figure out how to corrugate it. Somehow we ran into a guy who said he could do it for us, and the whole class, a someone whose name is lost in memory—whomever you are, thank you. I do remember him saying it took a lot more work than expected. A year later corrugated tin was available on the mini market.

The other trick was to teach rusting. On other projects we had used our Bug Juice in class, but rusting tin sheets took a lot longer than a handful of mini-nails—there would never be time enough on board.  After more experimentation we found that ocean water did the trick—we’d sprayed it on the tin and let Mother Nature take over from there. At home it worked like a whiz. On the ship it wasn’t so easy—we started with salted water (forgot to bring sea water) which didn’t work at all, then the next day tried ocean water we bottled while ashore. On went the spray, out came spots of rust blooming all over the tin. It looked like leprosy. We’d spray again, and all the previous rust washed right off. It took a while to realize the tin had to dry thoroughly between applications, and that many applications were required. That wasn’t so easy due to the limited class time—in port our students clearly preferred exploring Hawaii over making a fruit stand, and at sea there was so much motion in our workroom, tucked just inside the USS Constitution’s bow, that many were too queasy to work, teacher included (yours truly)—Noel was born with sea legs. 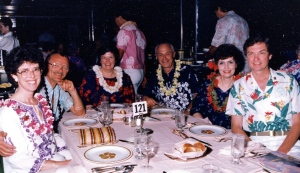 Dinner on board the USS Constitution with NAME luminaries–when we are all young and beautiful.

Delightful as it was to be housed and fed in the tropics, working a cruise is not the same as taking a cruise. The night after the first class Noel jolted awake in a panic—we’d had the students assemble the framing backwards, all ten projects had to be re-done before class at 9:00 a.m. It was 3:00 a.m., but there was no dissuading him. We had to track down the purser (he was not amused) for the key to the workroom, then figure out what to do. As it turned out, all we had to do was turn the frame around, and all was well. I think three students showed up next morning for class, the same stalwart three who attended most classes. Then there was the storm at sea, and another late night of getting back in the room to repair projects that had been thrown about. Our nightly worries over our students being dissatisfied with their progress were for naught–they were on vacation, and far more concerned about what tours to take in the next port of call. It would be a while before we learned how to chill, island style.

Our unwinding time came in Honolulu, after the cruise. We did a demonstration class for the miniatures group there, spending a few days touring and learning aloha with collector Jill Friedman, who also added the Tradewinds to her collection, though I can’t remember if that was planned in advance, or not. I do remember lying in bed in Jill’s home on the Pali, high above the city, lulled by the sweet smells of plumeria riding the morning breeze and thinking, “I could get used to this.” 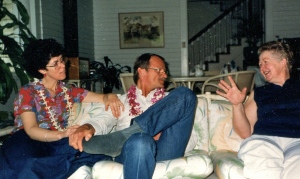 We spent another few days with Sarah Salisbury in her downtown condo, a spectacular 12 floors above Waikiki. Just below was one of those funky beachside Tiki bars, where we could sit at a table with our feet in the sand, sipping wonderfully numbing rum-and-umbrella drinks, enjoying our luck at having such accommodating customers and friends.

In 1974, my husband Noel and I began building aged miniature houses for collectors and museums. We were 70's dropouts. We quit our careers in advertising--art director and writer, respectively--and escaped Los Angeles in a VW camper and a Bug for a simpler life on the coast of Washington State. From a tiny studio in our home, we built 64 houses and buildings. Our specialty was aging--making a structure that reflected the scars and wrinkles of time, the elements, and human habitation. In the 80s we began teaching our techniques in workshops around the country, and I began to write our how-to's in Nutshell News and Miniature Collector. In 2000 we migrated across the Columbia to Astoria, OR, where , in 2011, we retired from miniatures. We are Fellows of the International Guild of Miniature Artisans and taught at their annual school in Castine, ME. By avocation I am a writer and poet. The blog is my way of working back into a writing routine, as well as recording what we did, and what we learned along the way.
View all posts by smallhousepress →
This entry was posted in Bio, Miniatures and tagged architecture, Hawaiian cruise, lifestyle, miniatures, N.A.M.E., Veggie stand. Bookmark the permalink.