A Tale of Twin Kitchens—Souwester and Shelburne

Posted on August 4, 2012 by smallhousepress

To round out 1986, we completed two house fragments–the Shelburne and Shoalwater Kitchens, named after two Seaview, WA inns.  These were smaller pieces than usual, but labor intensive—the women commissioning these projects were our two best and most supportive customers. While we toiled away in miniatures, the world at large was even busier—in 1986 the US bombed Libya, Reagan sold arms to our arch enemy Iran. We lulled ourselves with Magnum P.I. and the Cosby Show, and ached for the victims of the Space Challenger and Chernobyl disasters. We gassed up at .89 a gallon, sent our first emails, and took our first airline flights free of cigarette smoke. 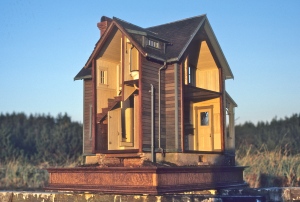 The Shelburne photos remind me how we were winding up our stint with Victorian architecture. Over the previous 12 years we had developed a vocabulary of elements that we moved around for each new project—the designs in the chimney brick, the inside/outside drawer for stove wood, bracketed, generous overhangs on the porch, drop siding, and aged cement foundations.  Each element became a word or phrase that formed the whole story of a structure and our signature style. I am pleased to see these kitchen are a prime example of our work, and don’t reflect our not-too-underlying desire to move on, to try out new dialects, and maybe a new language entirely. 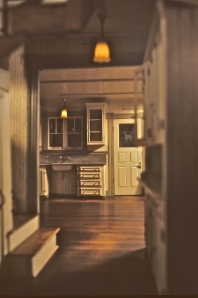 The customers, two collectors, who often carried on a friendly but ferocious competition at miniatures auctions, each wanted a kitchen fragment, an expanded version of our small kitchen fragment, the 1983 North Cove kitchen. They agreed to have similar smaller pieces built. So as not to have to design two different structures, Noel designed one, then flipped the design for the second, so as not to make exact duplicates.  We changed paint colors, in and out, and a few other details, but memory fails me as to the particulars.

There was a drawback in building two at once. The idea of ganging up our work to save time (twin houses presumably would go faster than two different designs) had never appealed to us. Our friend Jim Marcus believed in building what he called editions of houses—setting up jigs to use on 2, 3 or more of the same piece, and enjoying the process, but we weren’t cut out to be jig people. We did it with our chairs and garbage cans, and found the assembly line aspect bored us to tears. It just wasn’t worth the time saved. Plus, on a structure, we enjoyed the discovery of each piece of the puzzle, or at least how it fit in a new setting. Repeating ta puzzle once you know the answers is no fun. This time expediency won out over fun—we brushed off our Victorian vocabulary and started in. 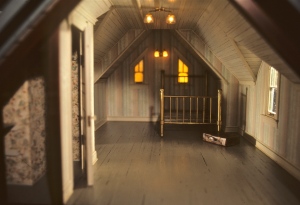 But there is the good part–the payoff for building a fragment is that you get to put a few evocative rooms into a small structure. For me, this Reader’s Digest version of a dollhouse is much more intimate than a larger structure. In this case the fragment was a large kitchen, butler’s pantry, with a winding staircase, leading to  an attic room/maid’s quarters and tiny bath above. Functional, but reminiscent of kitchens past, cooking, and family gatherings. Your mind can get lost in it. Much of the design stemmed from a similar setup in my grandmother’s house—something I must have nudged forward unconsciously, or not. I remember being thrilled to reach an age where I got to spend the night in that tiny room over the kitchen.

Once we got into the work, the story developed, and we became totally involved. Thomas quirks like lots of plumbing pipes are evident, along with the break-away walls that would have been attached to the rest of the house. Noel loved making drains and vent pipes (dowels), with elbows (wrapped with narrow strips of masking tape and painted to look like connectors).  Our vocabulary for any style included the cobby dust (thank you dear resident flock of baby spiders) that gathers between interior and exterior walls. Such utilitarian but important details, or phrases, add to what we called the reality of illusion, and were always a hit with the men viewing our houses. Handymen or not, guys seem to like plumbing. Maybe a way to enjoy miniatures without feeling silly. 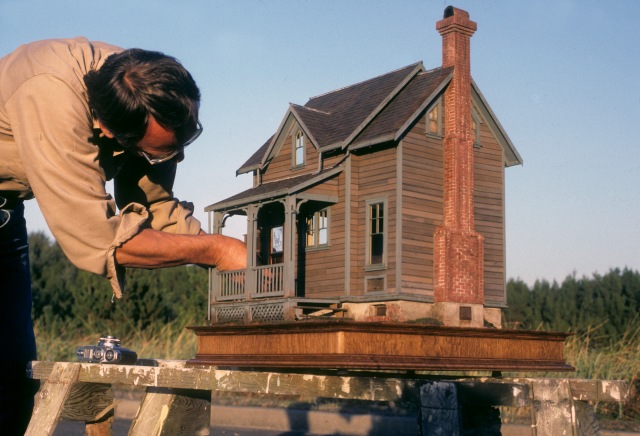 Looking for a location: Up on sawhorses in a beach parking at sunset

I‘ve combed our picture albums and boxes of slides, but can only find photos of the Shelburne. It’s mysterious–maybe we thought that with twins we could save film and only document the one? They weren’t exact twins, maybe fraternal, but you’ll just have to take my word for it. Today one resides in the Kansas City Miniature and Toy Museum, the other in a private collection.

In 1974, my husband Noel and I began building aged miniature houses for collectors and museums. We were 70's dropouts. We quit our careers in advertising--art director and writer, respectively--and escaped Los Angeles in a VW camper and a Bug for a simpler life on the coast of Washington State. From a tiny studio in our home, we built 64 houses and buildings. Our specialty was aging--making a structure that reflected the scars and wrinkles of time, the elements, and human habitation. In the 80s we began teaching our techniques in workshops around the country, and I began to write our how-to's in Nutshell News and Miniature Collector. In 2000 we migrated across the Columbia to Astoria, OR, where , in 2011, we retired from miniatures. We are Fellows of the International Guild of Miniature Artisans and taught at their annual school in Castine, ME. By avocation I am a writer and poet. The blog is my way of working back into a writing routine, as well as recording what we did, and what we learned along the way.
View all posts by smallhousepress →
This entry was posted in Houses, Memoir, Miniatures and tagged dollhouses, kitchens, miniature kitchens, Victorian architecture. Bookmark the permalink.

13 Responses to A Tale of Twin Kitchens—Souwester and Shelburne