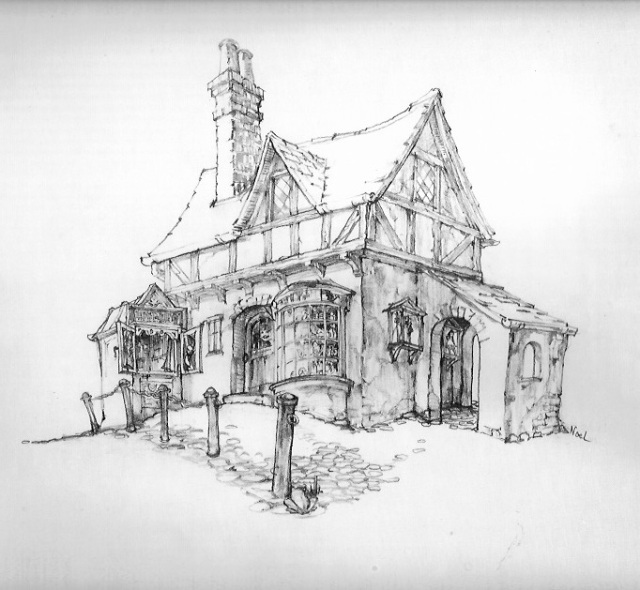 Coming in sideways, I am running late with this post, which is no way to treat the slew of you who read and responded to my last post. Before I start a new entry, I assemble the photos on hand, which gives me my jumping off point for stories and details. By the time we reached this project—Pippen Hill, #32 in 1984—we were switching from prints to slides, as they reproduced better for publicity. Over the past ten days I’ve been teaching myself to scan slides, in a new scanner, which is tricky, especially when it comes to trying to improve the look of under-exposed film. This old dog is slow to learn new tricks—not that I can’t, but I can almost hear the wheels creaking around (or not) as I move from one step to the next. Because you all have responded so well to the photos, I hope to include more of them as we go along. Some are not that great, but they show detail that you might otherwise miss.

As another sideline, you might be interested to know that the last post, about the Craftsman Bungalow, had the largest response (other than the posting that mentioned both Barry Manilow and married…but that was a whole other group of people) in one day–476 of you. WordPress, the blog host, makes it easy to obsess on one’s stats—it’s impossible not to peek every hour or so after a new post is up to see how many people have read it. Overall, since this began (January 2011), nearly nearly 26,000 hits have been made on the site. By big blog standards, that’s not much, but for us it’s pretty great. Thank you all. 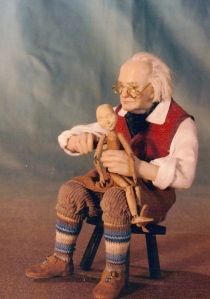 Okay, on to Pippen Hill, Part I. Our customer was Renee Delaney, a highly accomplished mini doll and toymaker. While we sat in the living room of her newly restored Victorian home, she showed us a  1/12th scale wax doll, made by Arlyn Coad, a Canadian puppeteer and IGMA artist. It was a wizened toymaker, carving a puppet. She said he needed a home. She then showed us a book illustrated by the Dutch artist Anton Pieck, and said, “I think he lives in a world like this.” We were immediately taken with the charm of his watercolors–an appealing old Europe/fantasy world, childlike without falling into “cute” or “sweet.”  Playing around in other people’s imaginations—Pieck’s and Renee’s, not to mention multi-hundreds of years of aging–sounded like the beginnings of a great new project.

The timing of Pippen Hill was perfect—building a fantasy toymaker’s shop after months of  working under the thumbs of Charles & Henry Greene’s exacting standards.  It felt the way a horse must feel running free of saddle and bit–not a straight path to be seen. We were also free to come up with all the materials we’d never worked with before or knew where to find—wattle and daub, cobblestones for the terrain (great texture, as Pieck so wonderfully illustrated) and a slate roof. But that could be dealt with later, first Noel got to play with design. He came up with a relatively small project (26”wide X 19” deep) that included an alleyway, bow window, cobblestone street-front, and a portable puppet theater (to take to the park a la a Punch and Judy Show). 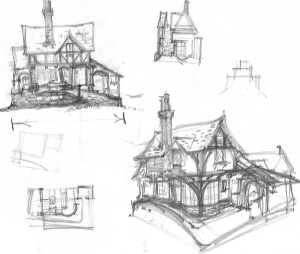 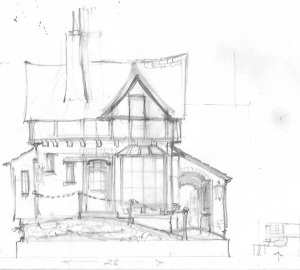 Trotting out into the field, we just took each problem as it came. We built the initial structure, as always, from ¼” ply. The wattle (wooden framework), framework and beams were rough cut from and unknown wood—maybe mahogany. 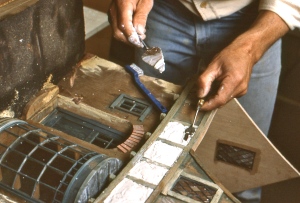 Daubing plaster between the wattles

Noel remembers it was hard wood, and required a lot of wire-brushing and end-aging with an Exacto. It looks old to me, even before the Bug Juice, like something we scavenged. The “daub” was Plaster of Paris, with probably a little Acryl 60 cement adhesive added (a product which holds the plaster together, and to the wood, preventing chipping or powdering down the line).

Jack Blackham custom cut the roof slates, each one with beautiful crisp edges I subsequently rounded and aged with needle-nose pliers. Because Noel designed-in an alleyway with diminishing perspective, I had to come up with cobblestones in ever-decreasing sizes. I think it was Mini Brick & Stone who made the bricks of a plaster-like material, tons of which I soaked in water and carved to the size and shape I needed. 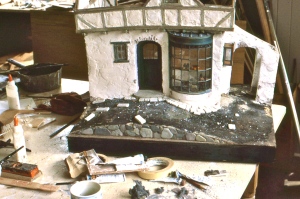 The facing stones at the front of the terrain look like flatish stones we must have found on the beach. The hill terrain has crumpled newspaper underneath, covered with a mix of sawdust, Elmer’s white glue, water, and Bug Juice to darken it. Once that mix is dry, it’s hard as stone. It can be painted with a diluted Elmer’s then sprinkled with sifted dirt, or sand, but for this we just glued the bricks and border paving stones right to the sawdust. 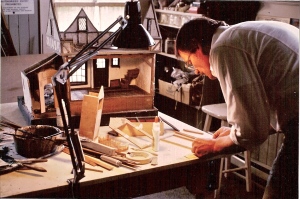 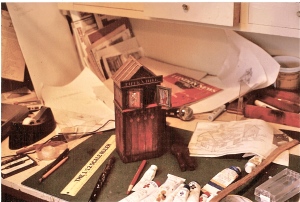 Next post I’ll get into the glamorous shots. This time I’ll end as I began, with a sideline I can’t resist: the other night Noel dreamed  that someone bought our Bug Juice formula for $60,000. Yahoo! And that was just the earnest money. Such are the dreams of ex-and-aged mini old house builders.

In 1974, my husband Noel and I began building aged miniature houses for collectors and museums. We were 70's dropouts. We quit our careers in advertising--art director and writer, respectively--and escaped Los Angeles in a VW camper and a Bug for a simpler life on the coast of Washington State. From a tiny studio in our home, we built 64 houses and buildings. Our specialty was aging--making a structure that reflected the scars and wrinkles of time, the elements, and human habitation. In the 80s we began teaching our techniques in workshops around the country, and I began to write our how-to's in Nutshell News and Miniature Collector. In 2000 we migrated across the Columbia to Astoria, OR, where , in 2011, we retired from miniatures. We are Fellows of the International Guild of Miniature Artisans and taught at their annual school in Castine, ME. By avocation I am a writer and poet. The blog is my way of working back into a writing routine, as well as recording what we did, and what we learned along the way.
View all posts by smallhousepress →
This entry was posted in Houses, Memoir, Miniatures and tagged architecture, dollhouses, wattle and daub, work style. Bookmark the permalink.