The Bungalow: Once Bitten 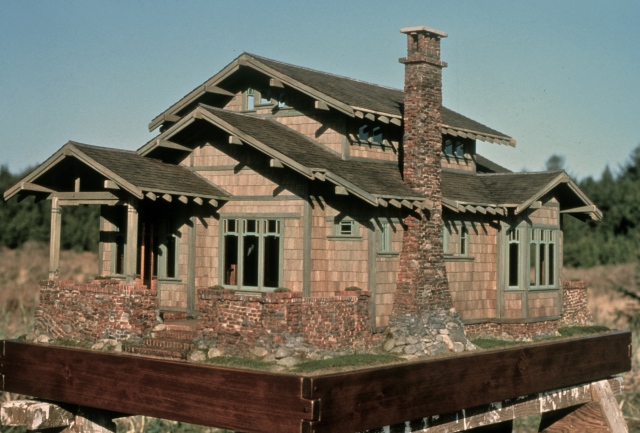 Somewhere in the late 70s we ran across a copy of American Bungalow magazine. Inside its covers lurked photos of the Craftsman bungalows of Pasadena, CA designed by Charles & Henry Greene. One look and we were smitten, or more like bitten by the bungalow bug. And the bite was deep. After all those Victorians we’d built, the bungalow looked like a breath of fresh air—the deep overhangs, the harmonic horizontal lines, the play of light and glow of the interior spaces, the exposed woodwork.  The bungalow vampire–instead of sucking the lifeblood out of us–re-charged our juices for continuing to build miniatures. 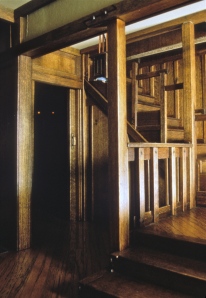 Thanks to a subsequent mini house delivery we got to tour the Greene’s Gamble House Museum (aka the Ultimate Bungalow) in Pasadena, along with another of their smaller houses in the neighborhood. Noel and I and a couple of European architects toured the house in almost total silence, stunned by the understated details, the brilliant problem-solving, and overall beauty of the spaces. At one point I had to laugh at how all five of us were standing with our mouths agape as we discovered an unexpected and fairly inconsequential use of the Greene’s signature “cloud-lift” design in a corner of a window. It is no overstatement to say it was a reverential moment, one of many we would have that day. The promise we had seen on paper played out even better in person. In Foodie terms, the discovery was tantamount to finding your first sushi bar after being raised on classic French cooking.

We drove home with a pile of picture books from the museum store, and a lot of animated conversation. Before we could attempt the style, we had to step up our learning curve, and finish off a few more commissions. In late 1983 we dove into a test run with a smaller house, to see what we could accomplish—maybe a Baby Gamble. Now that we were taking on the exacting style of two specific architects, we wouldn’t be able to fudge the details—every element had to fit perfectly with every other, with each space carefully planned in advance. We, two seat-of-the-pants dollhouse builders, merely had to duplicate brilliance.  Or fake it well.  Hee hee. But hey, the worst we could do was fail.

In this worktable shot you can see we finished the interiors first—we had to have as much access as possible to fit the puzzle pieces together. We used basswood to simulate the various hardwoods used in the originals. We ordered lots of 3-4″ stock so we could choose sections with more pronounced grains for the wall panels, then mill them to width and stain them the desired colors. 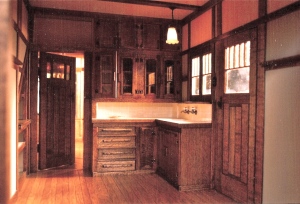 Each wall was designed and built like a piece of furniture. And, emulating the Greenes, the edges of every piece of stripwood were hand-sanded to a slight curve. The real trick was in getting the herringbone oak floor planks to line up through door ways and around corners. And, there were times we had to stop and re-figure, because a whole wall design would be out of balance with the rest of the room.

In the worktable photo you can also see the undulating clinker-brick base—another of the Greene’s signatures. We used plaster mini-brick, breaking and carving each one. The brick foundation segued into stone to soften the transition from house to landscape.  I’m not being facetious when I say it got really fun around the other side when we built the patio wall— 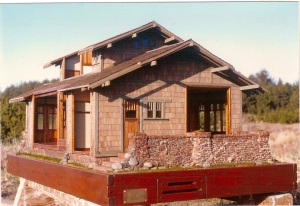 I loved the Zen of creating something so organic within the confines of the design.

As we worked, we tried to learn to think like Charles & Henry (as we came to call their ghosts, but not to their faces…) but often felt more like apprentices running around after them with our little brush and dustpan. They had been known to make their workmen tear out a whole day’s work if it didn’t meet their standard. Were they rolling in their graves, watching us slaughter their aesthetic?

Finally, we were satisfied the project was good, done, and ready to ship. We named it The Bungalow. Although it was decidedly a more Greene & Greenish bungalow than any other kind, we didn’t feel we could claim that association by name (by this time Charles and Henry were gods). But we remained bitten (and wanted more sushi!). Our mission was to find another customer willing to take on our dream of building a 2nd and larger bungalow, an adaptation of the Gamble House itself.

End Note: The Bungalow can currently be seen at The Toy & Miniature Museum of Kansas City.

In 1974, my husband Noel and I began building aged miniature houses for collectors and museums. We were 70's dropouts. We quit our careers in advertising--art director and writer, respectively--and escaped Los Angeles in a VW camper and a Bug for a simpler life on the coast of Washington State. From a tiny studio in our home, we built 64 houses and buildings. Our specialty was aging--making a structure that reflected the scars and wrinkles of time, the elements, and human habitation. In the 80s we began teaching our techniques in workshops around the country, and I began to write our how-to's in Nutshell News and Miniature Collector. In 2000 we migrated across the Columbia to Astoria, OR, where , in 2011, we retired from miniatures. We are Fellows of the International Guild of Miniature Artisans and taught at their annual school in Castine, ME. By avocation I am a writer and poet. The blog is my way of working back into a writing routine, as well as recording what we did, and what we learned along the way.
View all posts by smallhousepress →
This entry was posted in Bio, Memoir, Miniatures and tagged architecture, Bungalow style, dollhouses, Greene & Greene, miniatures. Bookmark the permalink.

9 Responses to The Bungalow: Once Bitten