How to Lose a Dollhouse: Shoalwater Toys

Posted on April 7, 2012 by smallhousepress 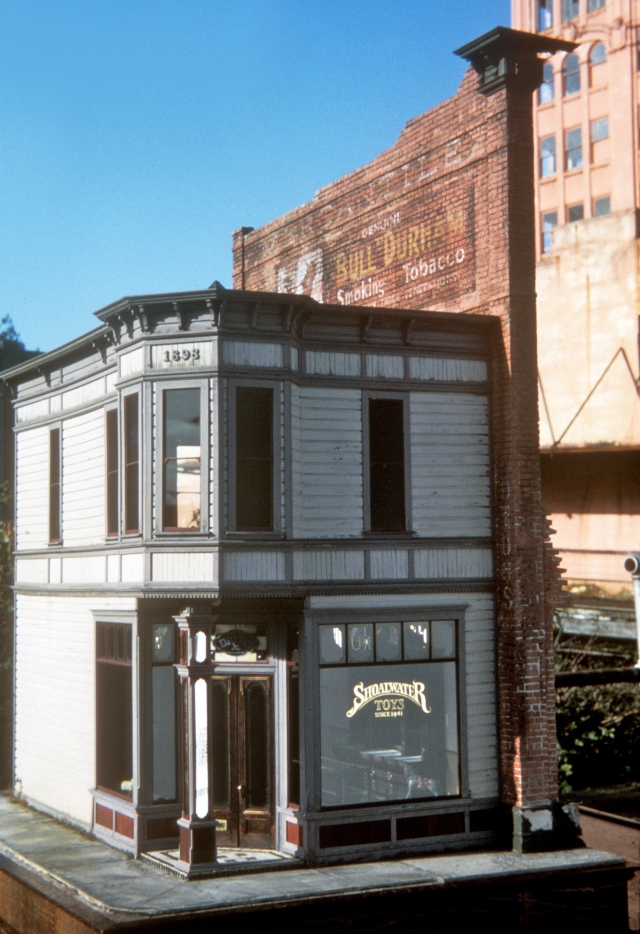 A few weeks into the construction of Shoalwater Toys, our 30th structure, and 2nd and last major commercial building, we received an invitation  to show at the IGMA’s Guild Show in New York City. Until then, we had only shown on the west coast, and westerners comprised the bulk of our customers. We decided to commit to the show, and work like crazy to get the building done in time to be shipped by our art shippers across country from Seattle to New York. As always, we felt like we were jumping off a cliff—this was a big investment of time and money when we were living on a shoestring, trying to make houses fast enough to pay the rent, and still make each one a unique design.  The show date made for a tight deadline, and we weren’t even sure of what the building would look like. Plus, the buyer lived in Santa Monica, CA, which required a second cross country trip for our big, fragile baby.

As with our first commercial building, Shoalwater Toys was inspired by the Victorian buildings of Port Townsend, WA, and gave us a chance to delve more deeply into sidewalk grunge, and how aging affects wooden siding, brick chimneys and signs, tarred roofs, gutters and downspouts. Noel also managed to squeeze a back alley into the design which gave my city-born heart a thrill. There is only one side left fairly plain, otherwise there are major points of interest on the other walls, and the roof.

Having spent a couple of my early adult years in a Manhattan 5th floor walkup studio overlooking (and trying to sunbathe on) rooftops, I was ready to tackle the goopy mess that is a rolled and tarred roof. I laid strips of muslin with overlapping edge, glued them down with Elmer’s, and tarred the whole thing with asphalt patching goop. Later I went back to age it with acrylic washes and Crackle It, to give it a murky, uneven color, and texture to the whole.  I finished up by adding some trash and dirt to the corners, and was on to the back wall bricking.

By this time I realized I was better at the grunt work—the somewhat tedious but (to me) relaxing jobs like beveling siding, gluing on thousands of bricks and floorboards, so Noel could go back in with his painter’s tricks and designer’s eye. On this building in particular, I provided the canvas, and he got to make it look pretty, in our trademark aged and sagging sort of way.

Not satisfied with a shingle roof on the cupola over the entrance, Noel made a glass roof, to bring in extra light. He also made an intricate copper-foil stained glass window transom-light over the front doors. The more jewel-like the entrance became, the more ideas he had. He gold-leafed the sign on the window, and etched the edges of all the glass. The final touch was the mirrored column on the leading corner.

From there he turned 180 degrees to make the decrepit and rotten-looking back door and alley way inset on the back corner.

The major back wall abutted what would have been the next building on the block. The top of the wall extends above the roofline, and what’s below is a torn-away view of the plaster interior wall of the other building. It also has a split in the middle so that whole wall can open up for access to the interior. 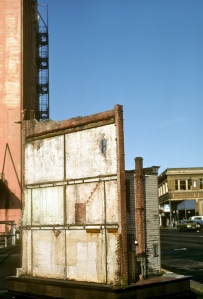 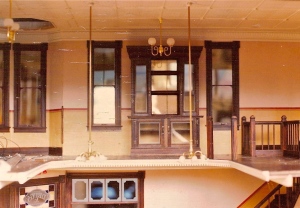 Inside, the building has a mezzanine, which is a little hard to see in photographs. It brought a lightness, as well as light, into the interior. As with the 20th St. Emporium, we used embossed cards for the “tin” ceiling, and laid stained ¼” fir planks for the flooring.

Finalizing the exterior, as with all our projects, was accomplished with “dirty water washes”—made with various combinations of burnt umber, Mars black, and raw umber Grumbacher tube acrylics, mixed to a paste and thinned to transparency with water. Basically a lot of water with a little muddy color. These thin washes we painted on with a #10 round watercolor brush, allowing each application to dry as we built up to the right amount of grunge. The final touch is the moss—added by dotting on Grumbacher Academy Sap Green directly from the tube onto moistened corners and shaded areas. 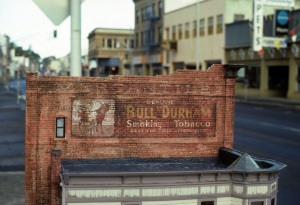 The paint was barely dry before we packed it in the van to take its picture in our nearest city–Astoria, OR– for convincing backdrops. Aided by our ever-ready friends Roy & Gordon, we got it out onto the street about 7:30 a.m., with bike riders and pedestrians passing by on their way to work. It was the one time we shot a house that not one person even glanced our way, or asked about the miniature. From there we drove it to the shippers in Seattle. It was all a matter of 3-4 months from start to finish.

On site in Astoria

No matter how a project is packed and/or delivered, the transition process from studio to owner always set me on edge.  Artech, our art shipper in Seattle, had already delivered many of our pieces, so they were ready to crate and ship this one across country to the convention hotel. Their crates are wooden, and huge—the size of a small tool shed—impossible to ignore or hide, and hard to toss around. We kissed the building goodbye, and headed home to pack for our own trip to New York.

My first errand at the hotel was to find the person in charge of convention shipments. Alas, she had gone home for the night, but I was told “someone” would help us right away. With a crate that big, that’s like not knowing that an elephant was delivered. You can always tell when there’s real trouble—no one wants to talk to you, or make eye contact. All the “someones” knew nothing. A call to the shipper confirmed its delivery the day before, signature illegible—it was lost, or worse. My heart was in my stomach, while I was running “Don’t Panic!” through my brain. To make a long story short, sometime after midnight the janitor clocked-in, the man who knew exactly which basement closet the monster inhabited. It had been delivered, and stashed, but all was well. Eventually (we have no recall of re-crating it, but we must have) it made its way back safely to its new home in Santa Monica, and my heart settled back into its cave.

End note: My best news of this week is that the blog–Notes from the Studio: from Bug Juice to Bird Poop–is going to be translated into Russian for a new website introducing the people of that country to miniatures. Welcome, and Добро пожаловать (Dobro požalovat’)!

In 1974, my husband Noel and I began building aged miniature houses for collectors and museums. We were 70's dropouts. We quit our careers in advertising--art director and writer, respectively--and escaped Los Angeles in a VW camper and a Bug for a simpler life on the coast of Washington State. From a tiny studio in our home, we built 64 houses and buildings. Our specialty was aging--making a structure that reflected the scars and wrinkles of time, the elements, and human habitation. In the 80s we began teaching our techniques in workshops around the country, and I began to write our how-to's in Nutshell News and Miniature Collector. In 2000 we migrated across the Columbia to Astoria, OR, where , in 2011, we retired from miniatures. We are Fellows of the International Guild of Miniature Artisans and taught at their annual school in Castine, ME. By avocation I am a writer and poet. The blog is my way of working back into a writing routine, as well as recording what we did, and what we learned along the way.
View all posts by smallhousepress →
This entry was posted in Miniatures and tagged dollhouses, don't panic, miniature show, Port Townsend, Victorian architecture. Bookmark the permalink.

3 Responses to How to Lose a Dollhouse: Shoalwater Toys