The Port Townsend, Pyrotechnics, and the Deer Revival

Posted on December 11, 2011 by smallhousepress 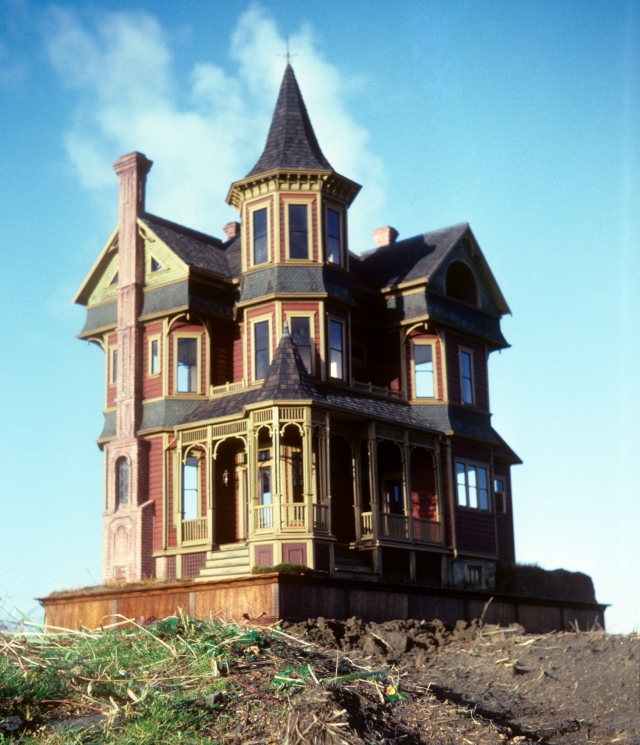 The Port Townsend, miniature house # 25, was the second of the major houses we built in 1981. It was named for a Victorian seaport on the Quimper Peninsula in Washington State, a town whose architecture deeply influenced our own Victorian period. The Port Townsend was the last of our asymmetrical Queen Anne-inspired houses, sporting towers, deep overhangs, and intricate gingerbread. The project was the culmination of all we had learned on the previous houses. Once it was done, we felt it was time to explore some new territory. The buyer was Barbara Marshall, collector and founder of the then new Kansas City Miniature Museum (now the Toy & Miniature Museum:  http://www.toyandminiaturemuseum.org.), a collection we feel honored to be part of.

The Port Townsend and the Megler Landing (house # 24), were variations on a theme. One of their major differences lay in their outbuildings. The Megler has an unattached garage, the Port Townsend has a greenhouse, in honor of Mrs. Marshall’s other miniature pursuit, propagating bonsai. Noel’s first drawing of the house showed a greenhouse with curved glass bordering the top edge of the walls, though I don’t think the curved glass really registered with me beyond knowing whatever he had drawn looked right. It was a few days before I looked him in the eye and asked, “How are we going to do this curved glass?” We had no idea, but put the thought away and went to work on the main house.

Knowing we couldn’t shape glass, we began looking for round-shouldered bottles we could cut, maybe with our window-glass scribing tools. One day in the supermarket Noel found a pickle jar with the perfect curve and bought a dozen or so (yes, we were lucky again, the pickles were good). However, the glass turned out to be too thick and irregular for our glass scribers. Before dollhouses, we were watchers of late-night TV, when those crazy Veg-O-Matic and Ginsu knife ads ran. One of that ilk was a gizmo that could cut a Michelob beer bottle to make a stemmed beer glass, should one feel the bottle was uncouth. It was one of those mind-sticking gimmicks people must have ordered, as a lot of them showed up later on garage sale tables. We knew we had seen one recently, but couldn’t remember where, and the concept of Googling had yet to be invented. Noel went into one of his mind-Googling trances and remembered a pyrothecnic trick from his childhood where he would, for inexplicable reasons other than it involved fire, soak a string in gasoline (where was his mother?!), tie it around a bottle, set it on fire and douse the whole thing in cold water. If he got lucky the glass cracked all the way around in a perfect circle. I saw this as a path to disaster, but Noel began the process of burning up string on pickle bottles. There was a lot of breakage, spillage of flammable liquids and more than one more trip to the grocery store, but eventually he got enough like-sized pieces to complete the greenhouse. He then treated the whole thing as a 3-D leaded glass window and copper-foiled and soldered the pieces together, adding stripwood for support and the illusion of a solid structure. The bottle glass is thicker and more distorted than the rest of the glass (old window glass), but the finished product is such a great illusion I don’t think anyone has noticed.

And while I’m on glass, there’s a trick we learned about using regular-thickness glass for miniature windows. Once you cut the glass to shape, darken the edges with a black felt-tip marker. This prevents light from reflecting off the cut edges, and once it is framed in wood channeling the thickness of the glass disappears. The mullions glued to either side of the glass appear to be one piece. The extra thin glass available for miniatures is very hard, and difficult to cut without a lot of practice. Plus, if you scavenge well, you can find many sources of old window glass, and get those vintage, wavy reflections. Try it. You will become a believer, too.

A few years after we completed the Port Townsend, the museum had a calamity—the heavy plaster ceiling collapsed. Huge chunks of plaster fell on the exhibits, most of which were inside glass cases, which helped buffer the blows. Many exhibits were spared, but quite a lot of plaster landed on our house. Barbara called, asking if we could come and make repairs. The damage looked so extensive no one there wanted to touch it. She was particularly concerned about the crushed weathervane, which was sheet brass, a Clare-Bell with a deer on it, and something we just happened to have another of. We packed up some paints and stripwood, our Exactos, Elmer’s, and the weathervane, and headed for Kansas City. 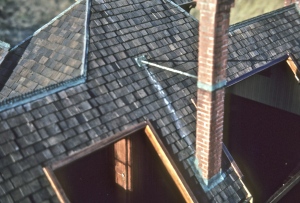 We were relieved to see the building was of a piece, and after a day clearing away plaster and glass with a vacuum cleaner and paintbrushes, it became apparent that the damage was minimal, other than a very dead deer weathervane. What amazed us was that the chimney hadn’t toppled, considering the weight of the plaster. After construction, a contractor friend had insisted we add the brace because the chimney was too tall and would blow over in a medium windstorm. The sheet-lead brace we glued between chimney and roof somehow took the brunt of the blow. It dented into a “vee,” but stayed stuck and did its job as chimney support.

As we worked, several docents asked about the weathervane–it seems the deer had a following, and its restoration to the top of the tower would indicate that all was well in the world. When they weren’t around, Noel jiggered with it, straightened it out, polished it on his shirt, and declared it savable. They applauded when we replaced it at the end of the first day. After that it was mostly a matter of repairing gutters and trim, re-touching paint, and we were done. For the duration we were treated royally, as guests in a wonderful downtown boutique hotel, tours through Barbara’s family farm, and dining out on Kansas City’s famous steaks. If it hadn’t been for our dog at home, and the pull of the next project, we might have lingered.

In 1974, my husband Noel and I began building aged miniature houses for collectors and museums. We were 70's dropouts. We quit our careers in advertising--art director and writer, respectively--and escaped Los Angeles in a VW camper and a Bug for a simpler life on the coast of Washington State. From a tiny studio in our home, we built 64 houses and buildings. Our specialty was aging--making a structure that reflected the scars and wrinkles of time, the elements, and human habitation. In the 80s we began teaching our techniques in workshops around the country, and I began to write our how-to's in Nutshell News and Miniature Collector. In 2000 we migrated across the Columbia to Astoria, OR, where , in 2011, we retired from miniatures. We are Fellows of the International Guild of Miniature Artisans and taught at their annual school in Castine, ME. By avocation I am a writer and poet. The blog is my way of working back into a writing routine, as well as recording what we did, and what we learned along the way.
View all posts by smallhousepress →
This entry was posted in Houses, Miniatures, People and tagged dollhouses, Port Townsend, Victorian architecture, work style. Bookmark the permalink.

8 Responses to The Port Townsend, Pyrotechnics, and the Deer Revival