Posted on October 31, 2011 by smallhousepress

Our biggest event of 1980 was the eruption of nearby Mt. St. Helen’s on May 18—not exactly in our back yard, but close enough. At around 8:30 that morning a plume of molten rock blew 80,000 feet in the air, sprinkling 11 states with ash, melting several glaciers within the volcano, and triggering widespread landslides. Rivers and towns were clogged with debris, and 57 people lost their lives. The cataclysm blasted the Spirit Lake YMCA Camp that Noel attended as a boy, along with the codgerly and stubborn Harry Truman, owner of a nearby lodge Noel remembers, into the cosmos. For our laid-back (and largely unemployed) friend Rocky–who just happened to be giving flying lessons, and own the gas tank, at the tiny Toledo, WA airport that would become the base of rescue operations, and the world press—it meant a living. When the mountain blew he was eating cereal in a lawn chair, camera in hand, watching for the eruption. Not only did he get a series of photos that would sell thousands of posters, but he had the notion to scrawl a sign on sheet of plywood, and post it at the entrance to the airport—Rocky’s Volcano Flights. 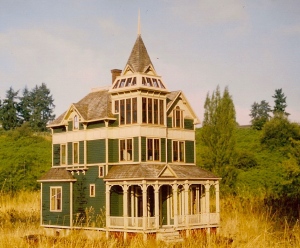 Our part of the state was spared devastation. In Seaview our eyes were glued to the TV coverage, while our hands were rolling out # 23, a house suddenly named the Mt. St. Helens. We were relieved to have only a little ash in the yard (I ran out with a vial to dust it off the plants with a paint brush), and, eventually, endless balls of pumice rolling into our beach.

For this project Noel decided to vary our architectural menu by designing a house with a square tower. The tower enclosed a large, wainscoted room with tall windows that could be used for star-gazing. And for more romance, a hatch in the ceiling lead to a small widow’s walk on the roof. The flip side of the hatch held a bench from which to view the skies.

Plus, the house had the kind of back porch I imagined as the mythical Granny-inhabitant’s perfect, solitary retreat to cool off after a hot summer’s day of cooking and canning.

As with many houses of the period, and locale, the back porch was an add-on, sided in board-and-batten rather than the more expensive horizontal drop-siding on the main structure. Back porches were always an excuse for a screen door, and a chance to try another kind of spring, so it would close with a convincing little slap, of the kind that made your mother yell, “How many times have I told you kids not to slam the screen door?!”

Over the years we tried springs from old cigarette lighters, ballpoint pens, and then a little envelope of  3/64th” springs that turned up, either from a friend or from one of our foraging missions at the surplus warehouse in Seattle. They did pretty well, though I don’t know how they held up over time.

The finishing touch was to be the ash, sprinkled on the rooftops and ledges, but my vial-full  from the yard wasn’t going to be enough. For that we called on Rocky–now owner of 5 airplanes, and official transporter of the Air National Guard and world vulcanologists–who flew in with jars of ash, and tiny pumice for the garden. 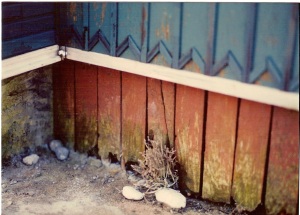 In 1974, my husband Noel and I began building aged miniature houses for collectors and museums. We were 70's dropouts. We quit our careers in advertising--art director and writer, respectively--and escaped Los Angeles in a VW camper and a Bug for a simpler life on the coast of Washington State. From a tiny studio in our home, we built 64 houses and buildings. Our specialty was aging--making a structure that reflected the scars and wrinkles of time, the elements, and human habitation. In the 80s we began teaching our techniques in workshops around the country, and I began to write our how-to's in Nutshell News and Miniature Collector. In 2000 we migrated across the Columbia to Astoria, OR, where , in 2011, we retired from miniatures. We are Fellows of the International Guild of Miniature Artisans and taught at their annual school in Castine, ME. By avocation I am a writer and poet. The blog is my way of working back into a writing routine, as well as recording what we did, and what we learned along the way.
View all posts by smallhousepress →
This entry was posted in Bio, Houses, Miniatures, People and tagged 1980, back porches, friends, lifestyle, miniatures, Mt. St. Helen's. Toledo WA, Victorian architecture. Bookmark the permalink.