It’s All in the Numbers 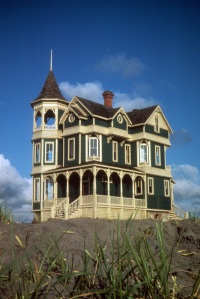 Miniature house #17 was The Oysterville, the second of three houses we built in 1978. #18 would make that 18 houses in 5 years—or 3+ per year. I think this was the first $6000.00 house, which boiled down to each of us earning almost .25 per hour. Yes, that’s cents, not dollars.  I can’t comprehend those numbers. Somehow we managed to finish and deliver houses more or less on time, as well as have a life with our dog, a garden, summers with Noel’s daughter, my part-time job at the bookstore, and a social life.

Since I didn’t start writing my column for Nutshell News until 1981, this and many of our Victorians are undocumented. However, The Oysterville  had an accident in a move from California to Washington in 1992, and I wrote about the house and repairs for the 12/93 issue, for those of you who collect them. More about that in another post.

The Oysterville featured a 3-story tower with widow’s walk, fishscale (or scalloped) shingle banding, complex roof shapes, alcoves and gables, and Noel’s trademark elaborate gingerbread trim. His expertise at gingerbread was due in part to Jim Marcus, one of the all-time great miniature housebuilders (most notably the San Francisco Russian Embassy series) who told us about the wood gelutong, which I have written about in previous posts. It is a wood with no apparent grain, which makes for easy carving. Noel would cut a length of gelutong stock in the dimensions he wanted for the trim, then cut that into lengths short enough to fit the Dremel scroll saw. He drew his gingerbread design on one end of the stock, then cut it out on the Dremel with an extra fine blade. The block was then sliced like salami into the proper thickness for the gingerbread. He repeated the process as many times as needed.

On the beach with The Oysterville

By 1978 we had become local celebrities. To our dismay, shop owners in town would suggest our studio as an attraction for tourists. For the most part these people were only out to gawk, and eat up an hour or more of our precious work time (or worse, our naps!). They thought they had come to see sweet little toymakers, instead they saw something they couldn’t comprehend–it just didn’t fit their expectations. It inevitably came down to the real question, “How much?” the answer to which invariably made them gasp, clutch their purses to their chests, and hurry out the door. The upside was some wonderful publicity from the press, including a lovely article written in The Daily Astorian (OR) by one Nancy Butterfield in 1984, which included a photo of The Oysterville. Unbeknownst to any of us, the photo and a few lines of her copy were picked up by “Ripley’s Believe It or Not.” They decided it was okay to name me Peggy, and their “artist” made a pretty poor line drawing from the photo (I guess to avoid copyright problems…) in which “Peggy” is enormous, and Noel looks about 10 yrs. old. The worst was the obvious incredulity at these people selling dollhouses for  “up to $20,000!”  As far as we know it only ran once, on a child’s page in an Alaska newspaper, but once was enough for some miniaturist to see it and send us a copy. It remains one of our prized possessions.

In 1974, my husband Noel and I began building aged miniature houses for collectors and museums. We were 70's dropouts. We quit our careers in advertising--art director and writer, respectively--and escaped Los Angeles in a VW camper and a Bug for a simpler life on the coast of Washington State. From a tiny studio in our home, we built 64 houses and buildings. Our specialty was aging--making a structure that reflected the scars and wrinkles of time, the elements, and human habitation. In the 80s we began teaching our techniques in workshops around the country, and I began to write our how-to's in Nutshell News and Miniature Collector. In 2000 we migrated across the Columbia to Astoria, OR, where , in 2011, we retired from miniatures. We are Fellows of the International Guild of Miniature Artisans and taught at their annual school in Castine, ME. By avocation I am a writer and poet. The blog is my way of working back into a writing routine, as well as recording what we did, and what we learned along the way.
View all posts by smallhousepress →
This entry was posted in Bio, Houses, Miniatures and tagged architecture, fishscale shingles, lifestyle, Ripley's Believe It or Not, The Daily Astorian, time & money, Victorian gingerbread, work style. Bookmark the permalink.

11 Responses to It’s All in the Numbers